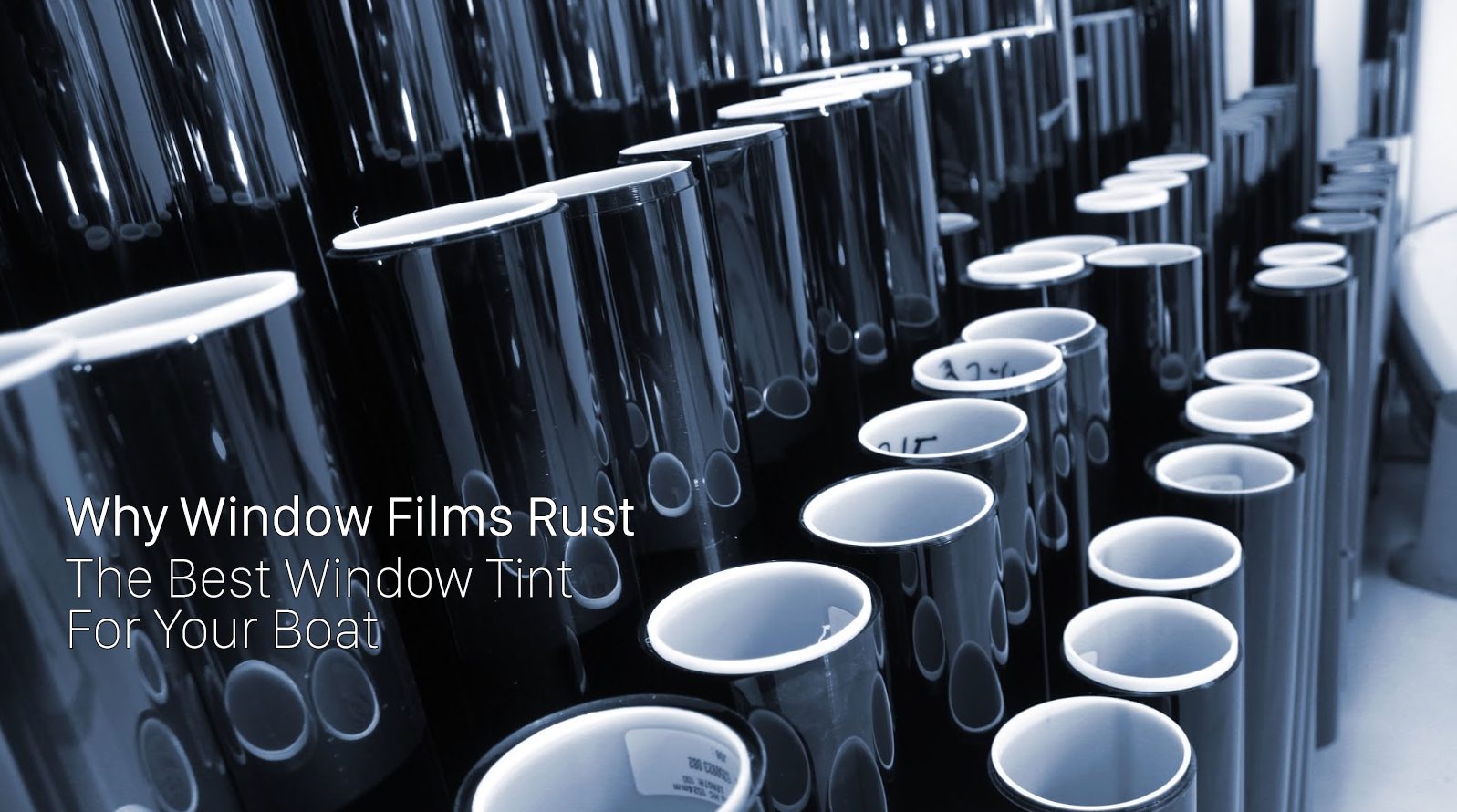 Why Does Cheap Marine Tint Rust?
This is such a common problem, and such an easy one to avoid as well.

Over the years, window films have changed a lot. Major innovations in the underlying technology have made modern window films more reflective, reject more heat, block nearly 100% of UV rays, all while lasting longer and being more affordable. Why is it, then, that marine window films are still so prone to rusting when out at sea? This is a question we hear often, and it formed the basis of the marine film line that we carry from Hüper Optik Canada.

First, let’s look at a few different types of films on the market to see why traditional films are not suited to marine window tinting.

Dyed film is the most economical type of window-tinting film. It is the least expensive and decidedly less functional than the others. It blocks light rays by the addition of dye to the film; the dye is placed in a layer next to the adhesive, and then applied to the window. Solar heat is absorbed by the dye in the film, thus preventing some of the heat from entering through the window. However, dyed window-tinting film is used primarily for appearance. From the outside, dyed film looks flat and opaque, providing some privacy while still permitting visibility from the interior; when used on the windows of a boat, it will appear black. The dye does tend to fade with time, however, which means it is not suited to boats sitting on the water for the entire season. The heat-reduction provided by most varieties of dyed film is not particularly high either, so it has no performance benefit.

Verdict: Not Suitable for boats.

Like dyed film, metallized film keeps heat away from interior space by reflecting it away. This is this achieved by very small metallic particles being embedded in the film. This metallic content strengthens the window, which means that it will be more shatter resistant than from the factory. When used on a boat, however, metallized film has a tendency to interfere with cell phone and GPS transmission, not to mention radio reception. The metal particles will also corrode when they come in contact with the salty ocean air, meaning that your windows will be begin to rust over in no time. To avoid this, installers used to come back after the film had cured to use silicon caulking to seal the edge of every window. This amounts to double the install time, increased room for error, excessive cost, and less than optimal appearance.

Verdict: Not suitable for boats.

Ceramic is the highest quality window film material on the market. It contains neither metal, dye, nor carbon, but instead a kind of ceramic particle that is both nonconductive and nonmetallic. Ceramic film has only recently appeared on the market, but has already proven its worth in terms of performance and reliability. Ceramic window-tinting film cuts from 45% to 50% of the solar heat that enters through the windows in the form of infrared light, while allowing maximum visibility both by day and night. Ceramic window-tinting film allows maximum efficiency in the functioning of radios, cell phones, GPS systems, and all other such devices being operated from inside the protected space. It surpasses the other types in its resistance to glare and fading, and renders windows highly shatter-proof. Ceramic film is also most effective in its blocking of UV light from the interior; in the case of ultraviolet light (the kind of light rays that contribute to sunburn and skin cancer), ceramic window-tinting film can block up to 99% from entering the interior.

Since it is non metallic and contains no dye, it does not fade or rust when on the open seas. This makes it a perfect choice for marine tinting. Our window film lines at both price points are Ceramic, meaning they are guaranteed for life against corrosion and are perfectly suited to marine window tinting. Check out our premium films right here, and our Edge XP Ceramic Films here.

Contact us to make an appointment today. We are happy to answer your questions and give you a free quote anytime.
Get In Touch

Copyright 2017 - All Rights Reserved - by qDesigns